Shopaholic States of America: How Much Do Residents in Each State Spend on Clothes? 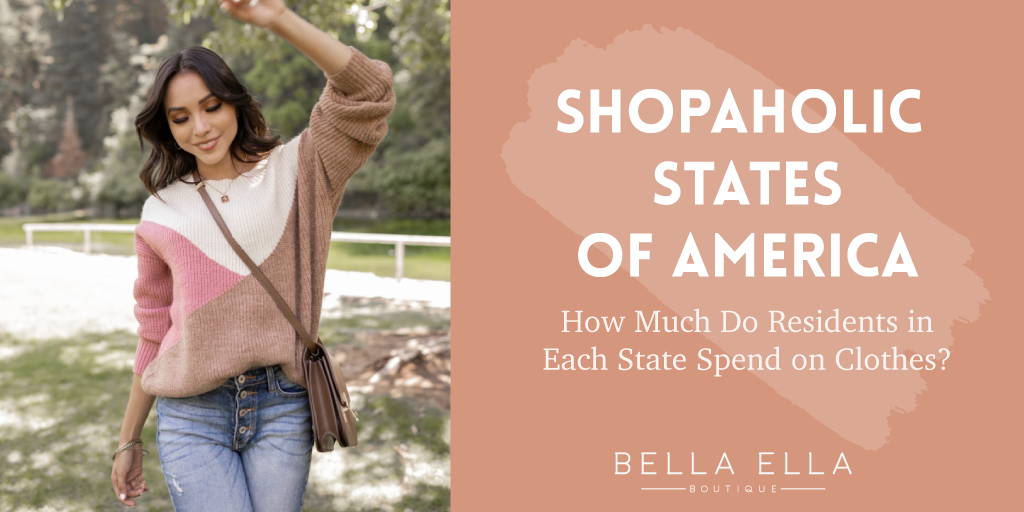 How Much Do We Invest in Our Wardrobe Each Year?

Let’s face it: there are very few things in life that a little retail therapy can’t fix. Whether it’s coping with a stressful situation or celebrating an exciting, new opportunity, there’s something extremely empowering about buying a brand new outfit that perfectly matches your aesthetic.

And while we can collectively agree with the idea that a quick shopping spree can work wonders, our wallets aren’t always necessarily in agreement with our hearts. A few occasional splurges—both big and small—have a way of adding up. One maxi dress can quickly turn into five tops, multiple pairs of distressed denim, and matching booties that you simply couldn’t say no to!

Staying up to date with ever-evolving fashion trends comes with a price tag. So how much do Americans really spend on their wardrobes in 2021?

Due to the pandemic and the vaccine rollout,fashion spending has certainly fluctuated over the past year and a half, so the team at Bella Ella Boutique wanted to investigate: how much is the average American now spending on clothing, shoes, and accessories annually? Further, how much of an individual’s annual income is devoted to fashion purchases?

So does your state fall under shopaholic territory? Read on to see how your home state stacks up!

The States With The Most Shopaholics 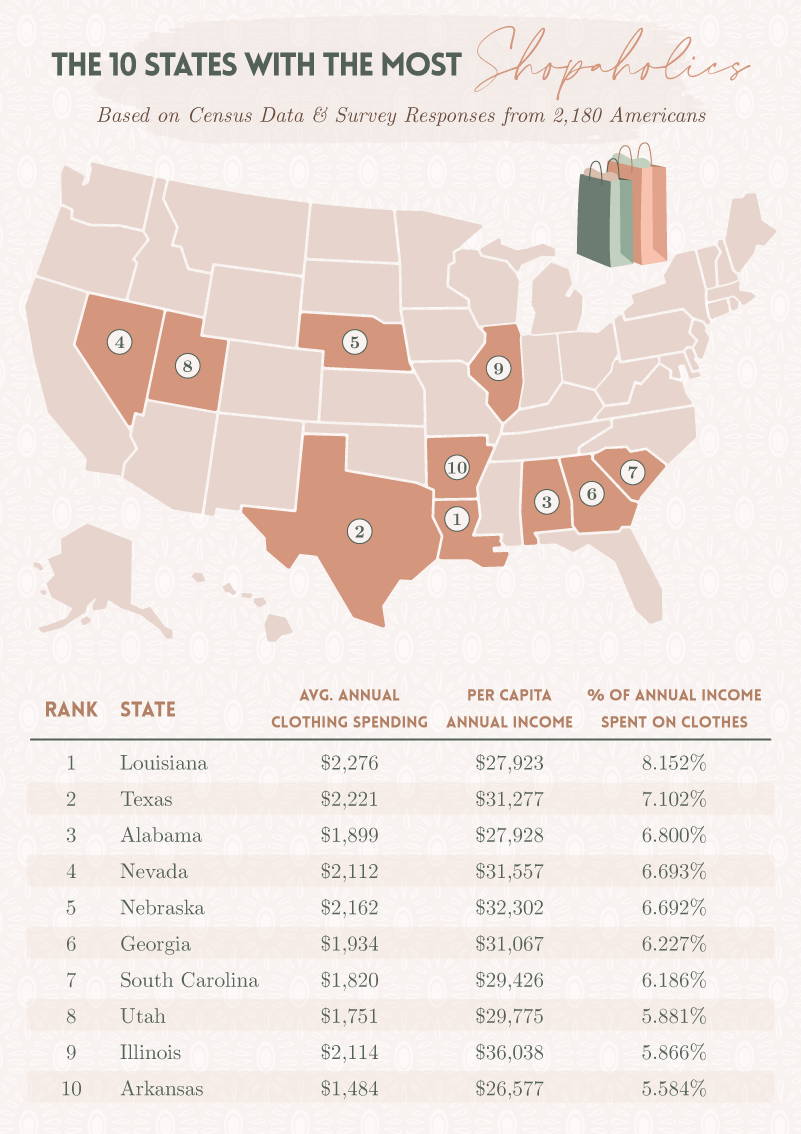 First, we wanted to know which U.S. states spend the largest portion of their income on their wardrobe annually. Turns out Southerners take their shopping very seriously, with six of the top 10 states crowned the biggest shopaholics located in the Southern region of the country—and honestly, can we blame them? But only one state can hold the title of the ultimate shopaholic state.

If you’re ready to spend some cash on clothing without judgment, head to Louisiana. You’ll be in good company in the Creole state, where the average person spends over 8% of their annual income solely on fashion purchases. This adds up to roughly $2,276 each year reserved for the trendiest t-shirts, trousers, and trainers. Some might call that shopping addiction, but we call it dedication to personal style!

But Louisianans aren’t the only ones who know how to treat themselves. The average Texan spends about $2,221 annually on clothes, making them the #2 biggest shopaholic state in the U.S. They join Louisiana as the only other state that spends more than 7% of their average annual income on clothes.

But not all states are as quick to chalk up as much cash. Let’s take a deeper look at spending habits around the country.

All things considered, the average American spends around 4.3% of their annual income on clothes. Despite being so close to one of the biggest shopping capitals on the globe, New Jersey is home to the most modest shoppers. Locals here spend just 2.19% of their income, or $934, on clothes annually. Just three other states—Maine, Oregon, and Vermont—can say they spend less than 3% of their annual incomes on their wardrobe.

Speaking of the Big Apple, we were surprised to see that New York falls just slightly above the national average at 4.73% of the annual income going towards clothes. Apparently, the abundance of retail shops nearby isn’t enough to compromise budgets for locals. 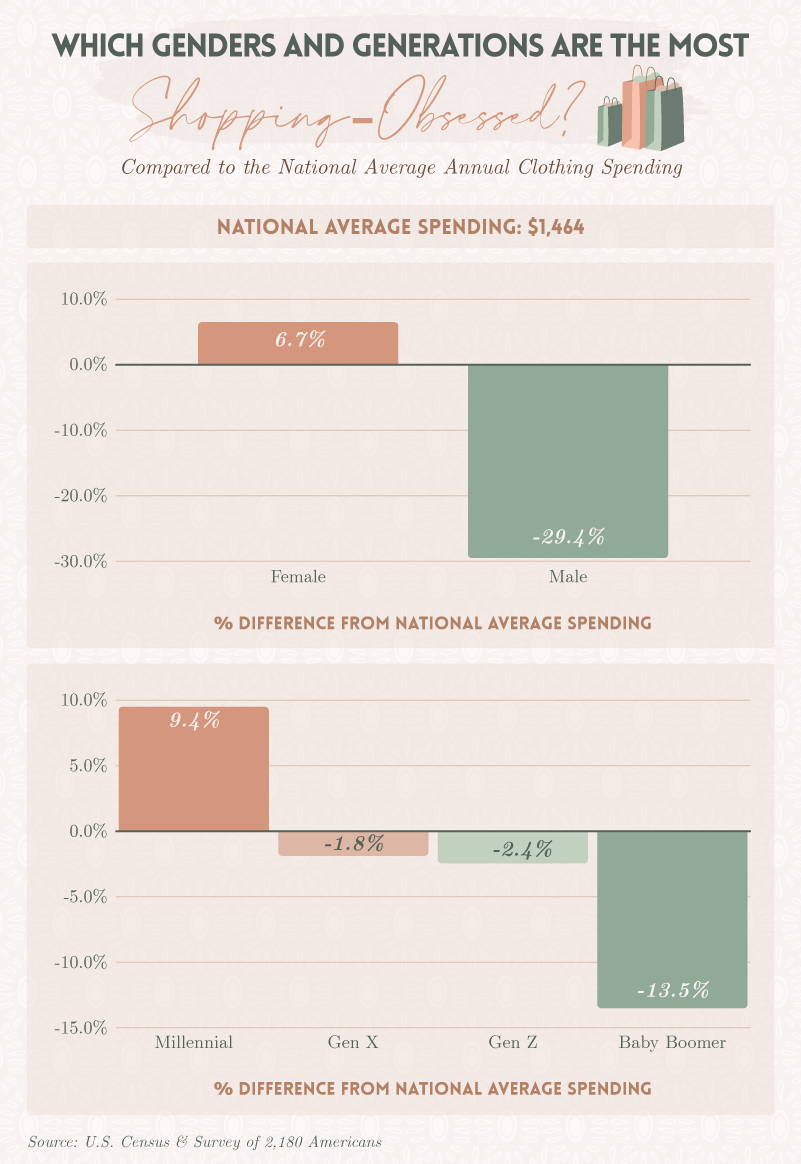 Moving on, we wanted to know how gender and age play a role in a person’s shopping habits. Turns out the percentage difference in clothing spending between men and women is 40%. The average female spends approximately $1,562 each year on clothes compared to the average male who spends $1,033. That $529 difference adds up to a disparity of over $38,000 over the course of one’s life.

Though it seems that the older we get, the more we spend on our wardrobes. Baby Boomers spend 13.5% less than the average American on clothes. On the other hand, millennials are the most likely to shop until they drop, spending an estimated $1,601 on clothes every year––9.4% more than the national average. 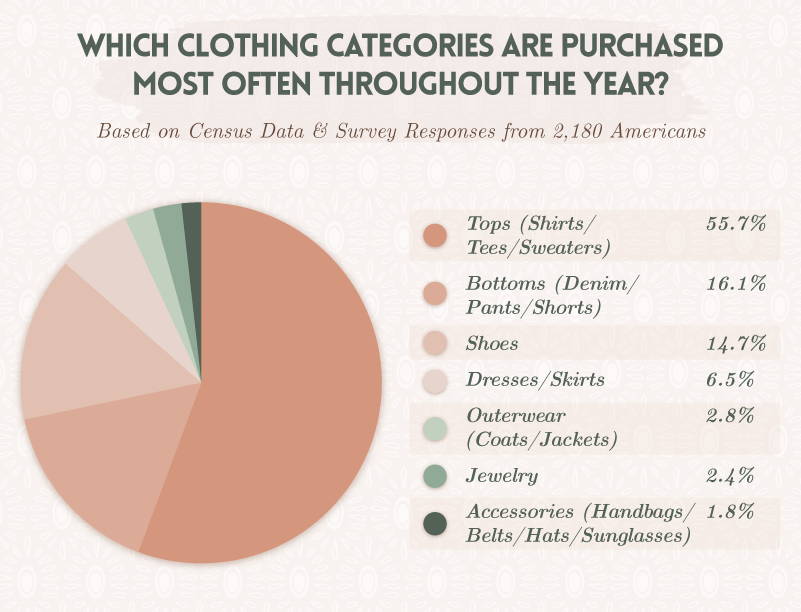 Perhaps more important than how much you spend is what you spend it on. And if you’re like most, you’re probably spending a good chunk of your clothing budget on shirts, tees, andsweaters. The next most purchased categories are bottoms, followed by shoes. We’re not surprised these three categories make up the majority of spending given that they represent the biggest year-round closet staples.

According to the data, accessories and jewelry are the least likely to take priority—but we recognize the value a good necklace or handbag can add to an outfit, even if we don’t need new accents every season.

Altogether, our research demonstrated just how much Americans love to shop. From the east coast to the west, it’s safe to say that there’s a little bit of a shopaholic in all of us from time to time. There's simply nothing like the joy of walking past a mirror admiring how good you look in a new outfit.

If all this talk has got you in a shopping mood or if you have an upcoming event, check out our curated collection of casual and special eventdresses. Whether you're strictly tied to your budget or an unapologetic spender, Bella Ella has everything you need for a closet refresh!

*In the context of this study, “clothing purchases” represent purchases of clothing items, shoes, and accessories. Alaska & Hawaii were not included in this state-by-state study due to a low number of survey respondents.