What’s in Your Closet? Survey Reveals Americans' Feelings Towards Their Wardrobes

With the start of spring upon us, we knew that it was time to start cleaning out our closets and shopping for a new spring wardrobe. Taking a look at our closets made us wonder about the hidden closet habits of our fellow Americans. What do people spend on additions to their closet each season? How do most people organize their clothes? Dying to get answers, we conducted a survey of thousands of Americans to reveal their closet tendencies. You can find some of the most intriguing results below. 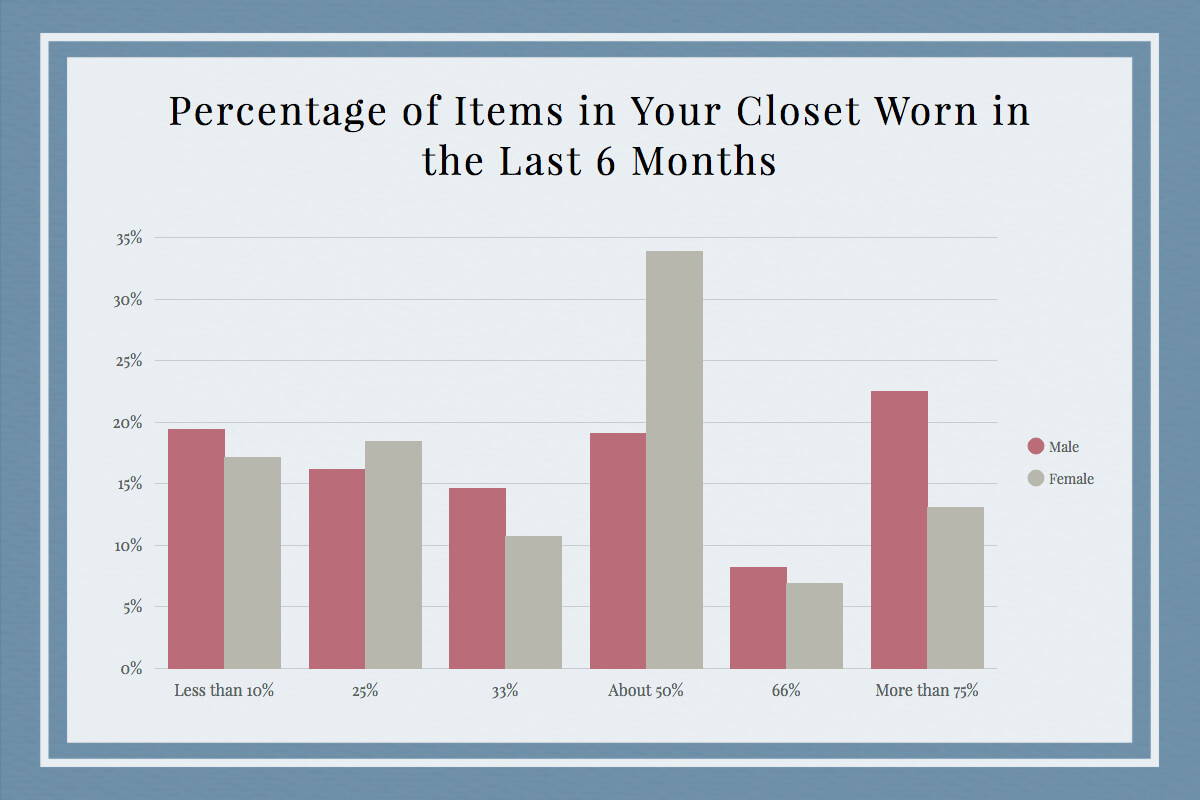 We were happy to find out that we aren’t the only ones guilty of buying clothes and never actually wearing them. More than 15% of women and nearly 20% of men said that they’ve only worn 10% or less of their closet in the last 6 months. 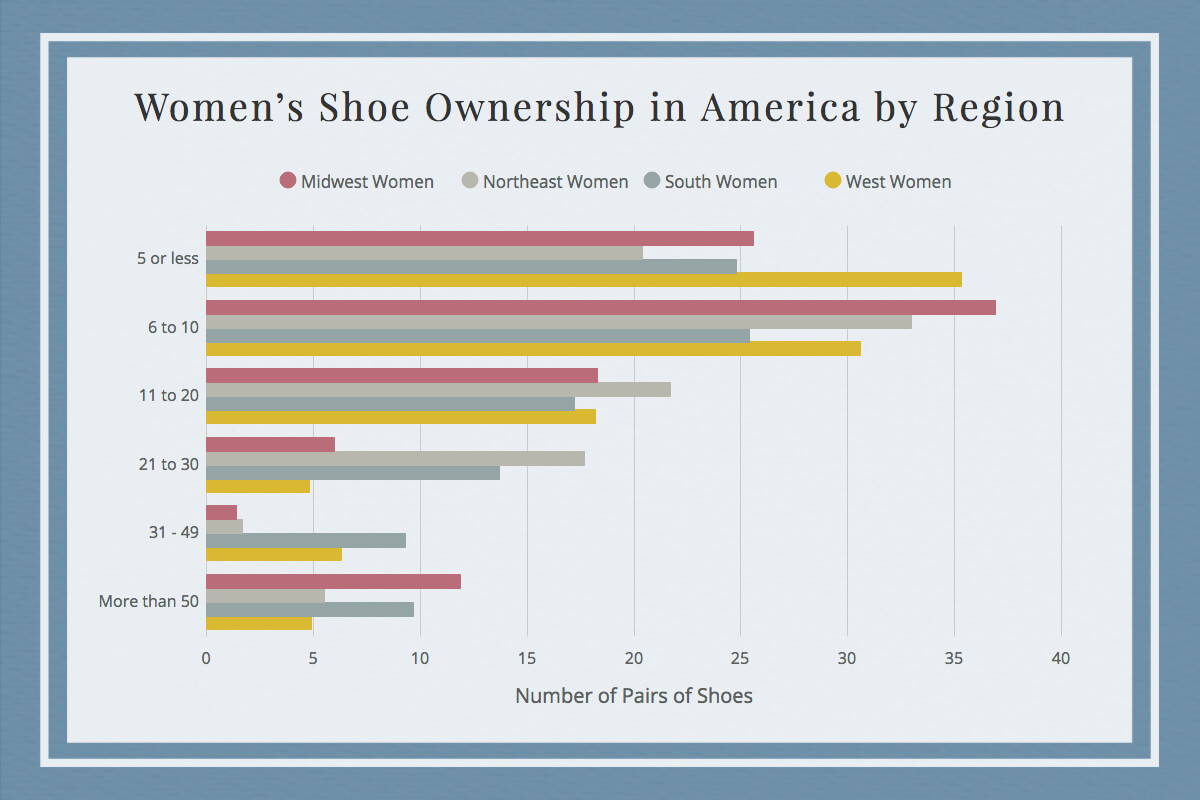 With so many shoes options on the market, it can be difficult to keep a shoe collection to the minimum. While the majority of respondents claimed to own 10 or less pairs of shoes, around 12% of midwest women own 50 or more pairs. The women from the west seem to be the most minimalistic. This is a stark difference from celebrities like Kim Kardashian who are rumored to own hundreds of pairs of shoes!

It seems like women from the West have different opinions on shoe ownership than women from the South. Over 35% of western women own 5 or less compared to less than 25% of southerners. Meanwhile, nearly 10% of Southern gals own more than 50 pairs while only 5% of Westerners own that many. 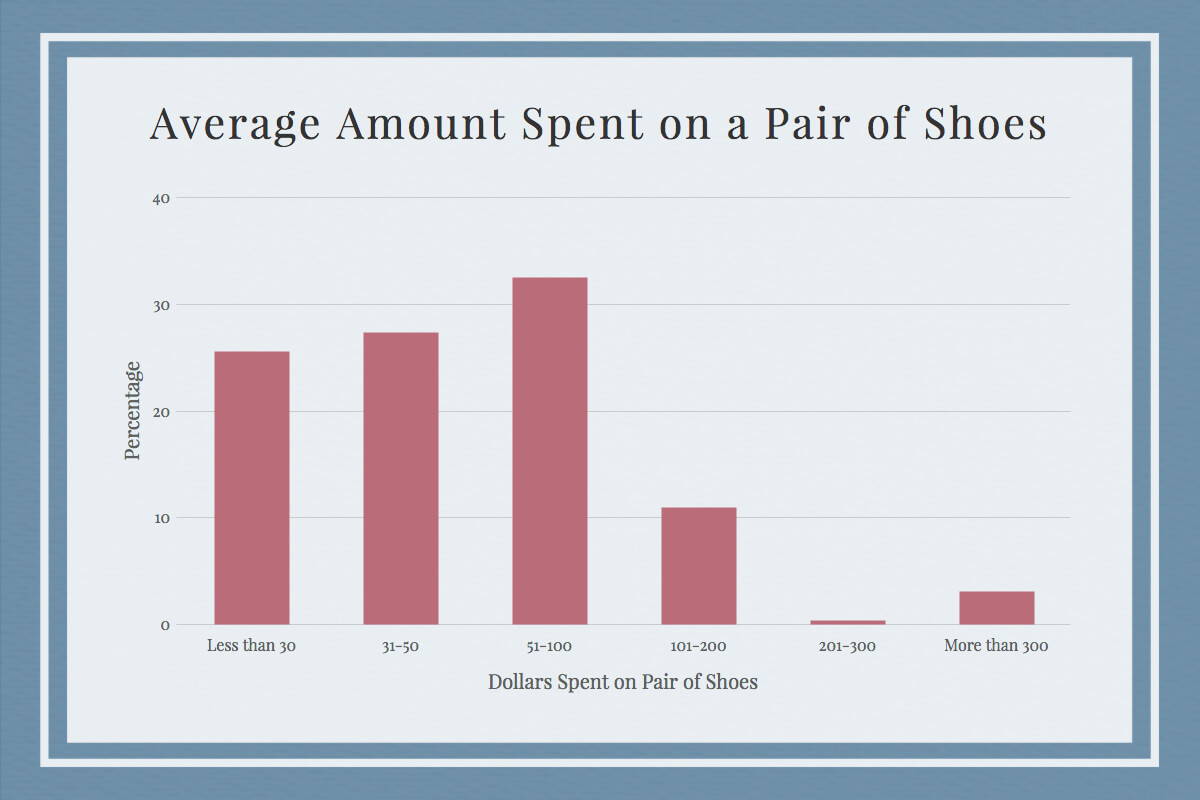 It turns out that our survey respondents were frugal shoppers, with around 25% stating that they spend an average of $30 or less on a pair of shoes. Less than 5% said they spend more than $300 on new kicks. 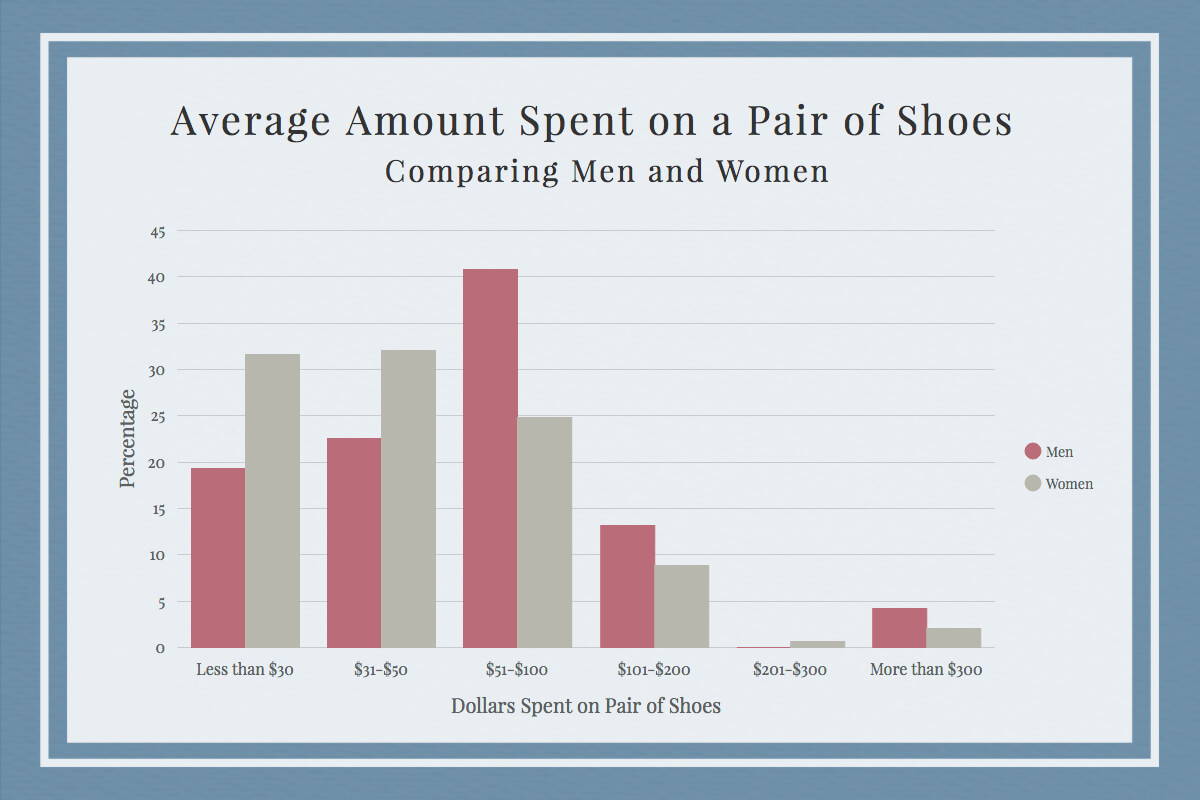 Interestingly, men seem to be more willing to splurge on their shoes. Over 40% of male respondents spend an average of $51-$100 on shoes compared to less than 25% of females. 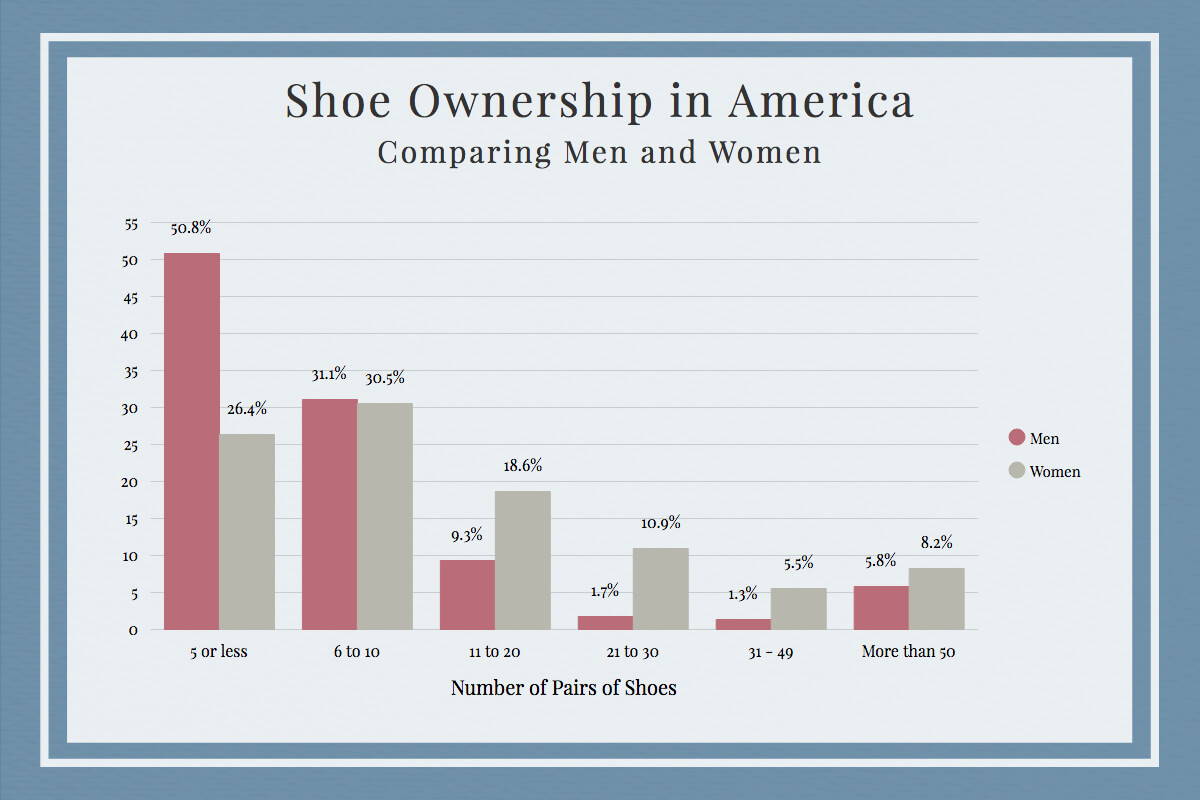 Although males might be willing to fork out more cash on their shoes, they typically own fewer shoes than women. Perhaps they value quality over quantity. Nearly 11% of women respondents own 21-30 pairs compared to only 2% of men. 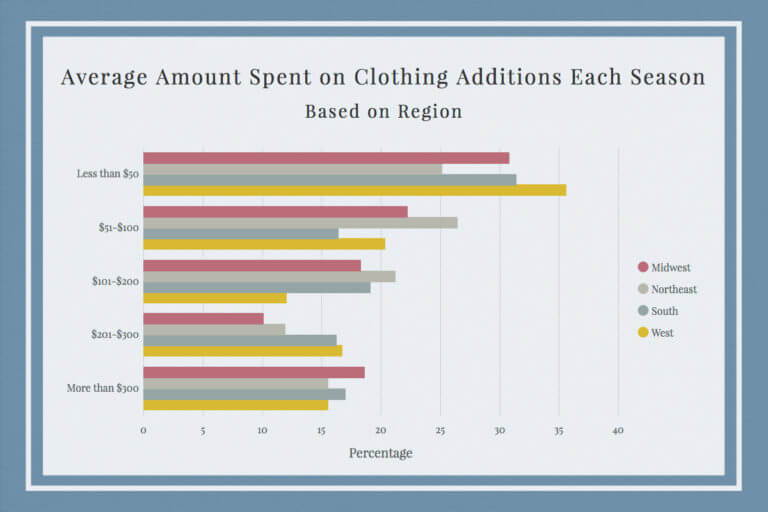 Although there were more obvious differences in shoe ownership by region, most of the country can agree that they will spend less than $50 on new clothes each season. 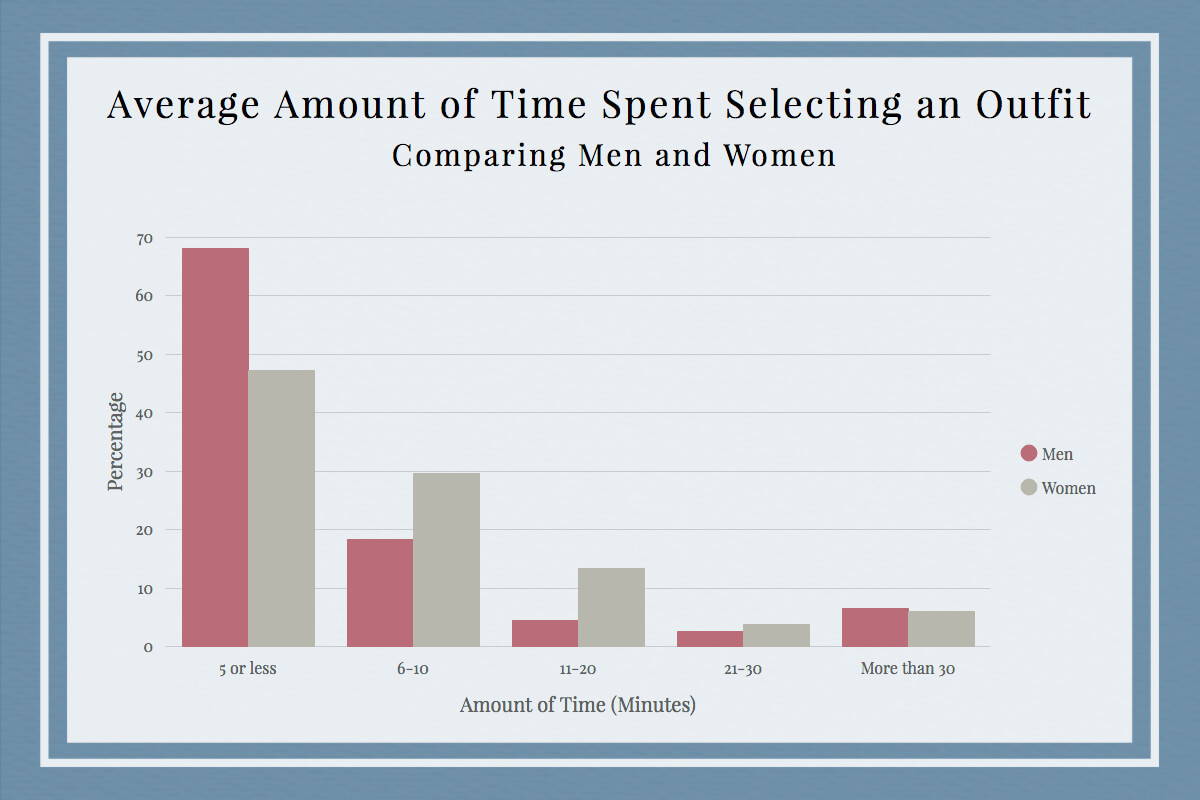 Not surprisingly, women seem to spend a little more time than men when it comes to picking out their outfits. Approximately 12% of women said that they spend 11-20 minutes on selecting the perfect look compared to 5% of men. 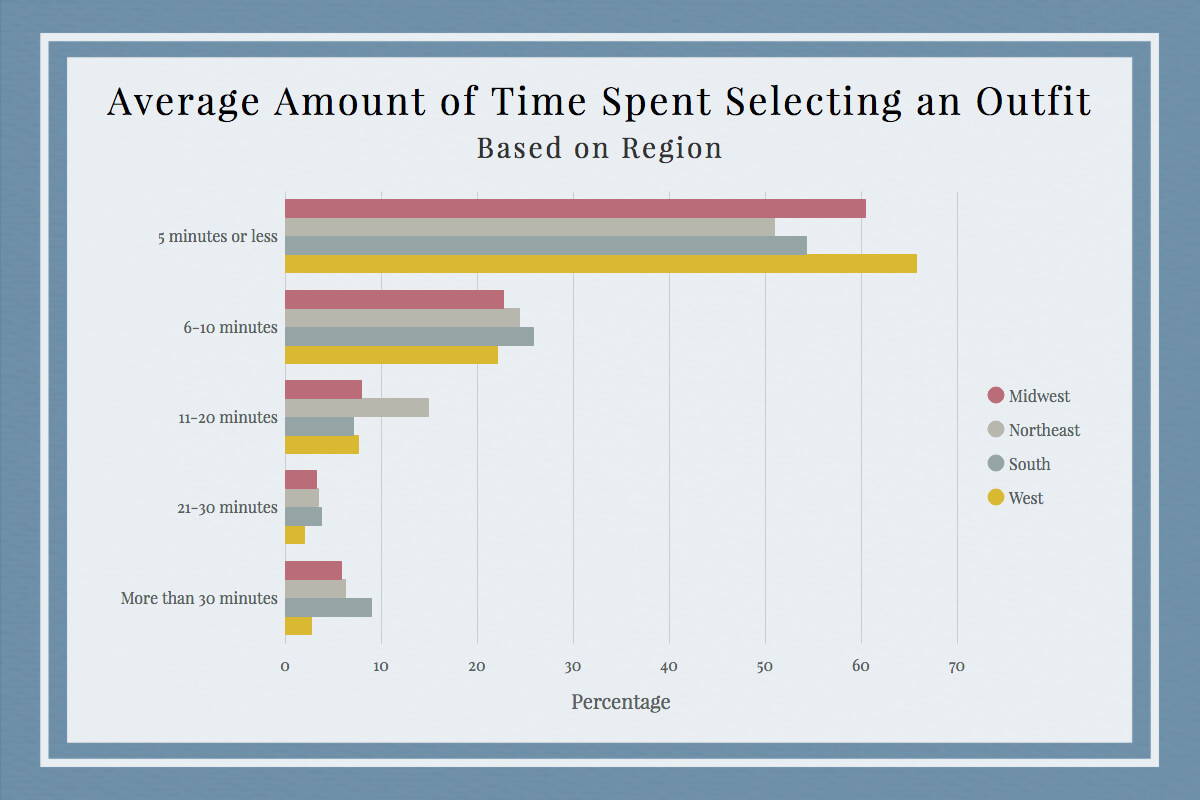 It seems like personal style and first impressions truly matters in the South. Our survey results revealed that women from the South were most likely to spend more than 30 minutes picking an outfit for the day. 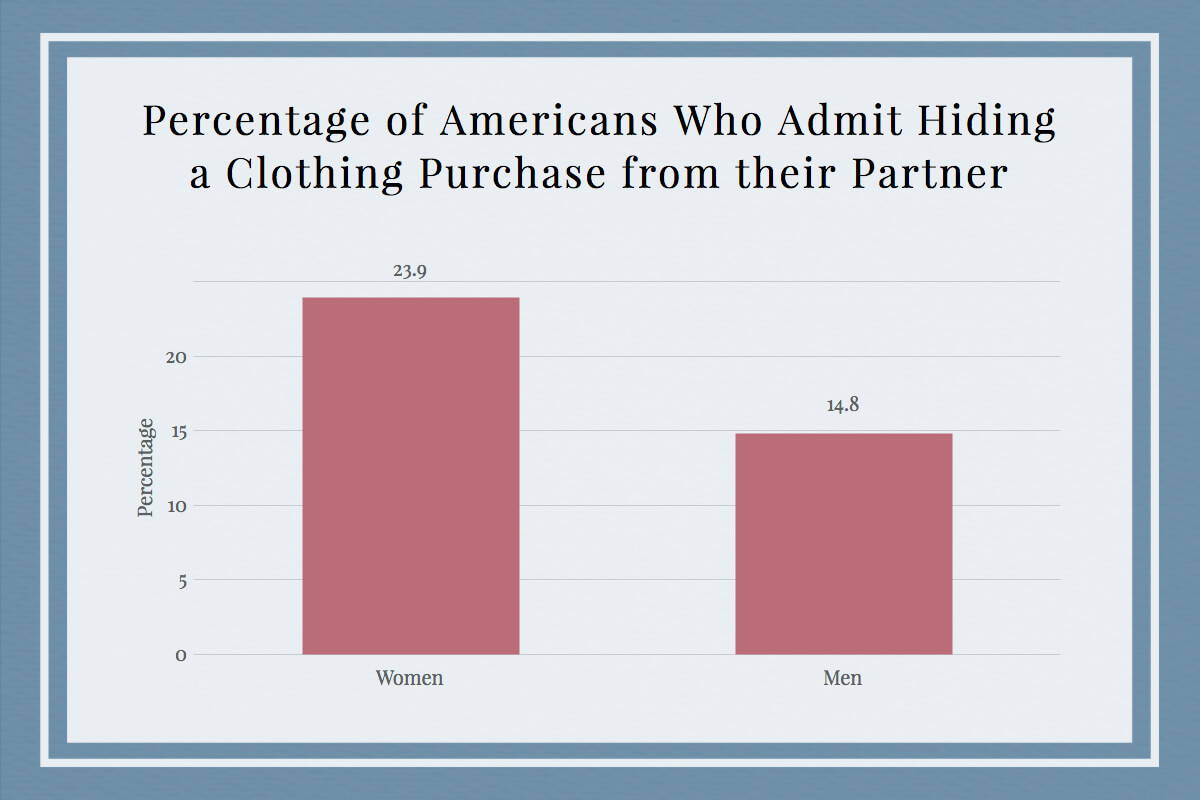 While the majority of our respondents claim to be completely truthful to their spouse, women were more likely than men to hide a clothing purchase. 24% of women have hidden a purchase from their partner while only 15% of men have. 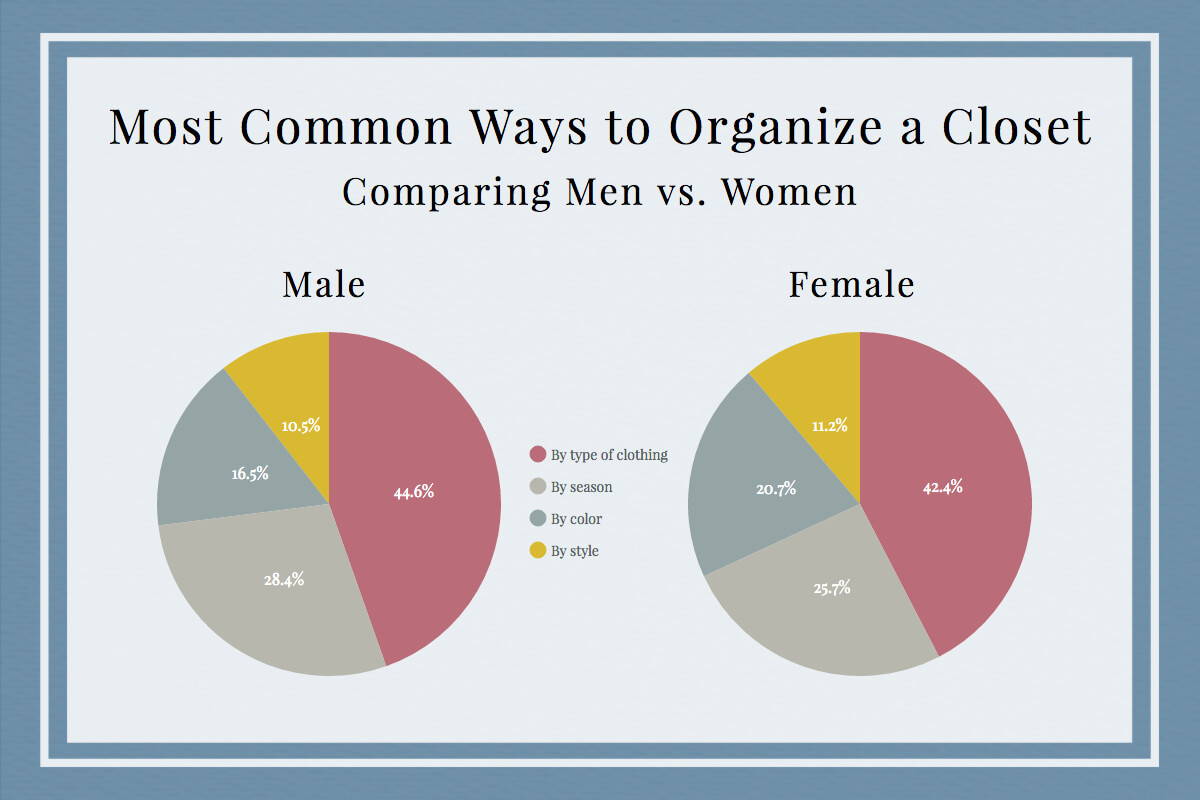 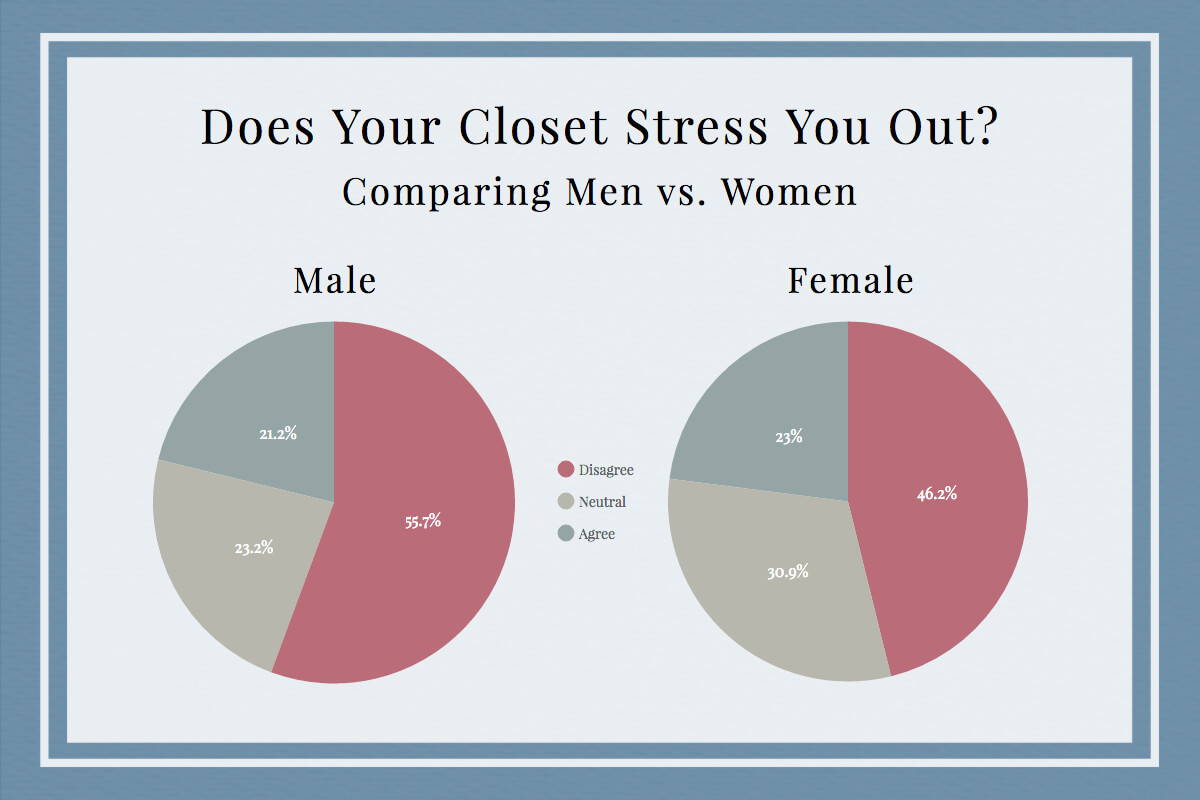 Closets can be a bit overwhelming. There are so many options of what to wear, how to organize it, and what to purchase, but our respondents seemed to have the stress under control: 46% of females and 56% of males said that their closets do not stress them out.

Now that we’ve uncovered the secret closet habits of the average American, where do you stand on your relationship with your closet? Do you agree with what our respondents said or do you feel differently about your wardrobe? Let us know in the comments below.

Where are these statistics from?

What a great study topic! Thanks for sharing your survey results. I have been personally working on my wardrobe, both developing a personal style and managing the size for a couple of years. I really wanted to go minimalist with a capsule wardrobe, but discovered I just like playing with colors and style changes too much. Fun to see what other people do and how they feel about their clothes.